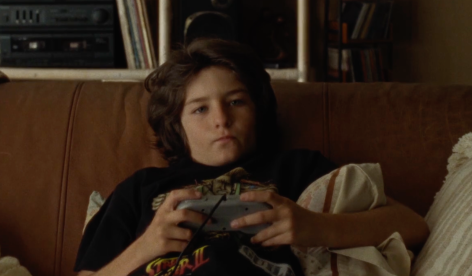 Jonah Hill knocks it out of the park with his directorial debut! Mid90s is about a boy, the one pictured above named Stevie (Sunny Suljic) trying to fit in. Stevie lives with his brother Ian (Lucas Hedges) and both are raised by their single mother, played by the lovely Katherine Waterston. Stevie finds his group, a group of neighborhood skateboarders.

Mid90s is shot on film and presented in 4:3 aspect ratio, so the overall feeling and mood you feel while watching is absolutely spot-on. You are instantly immersed into the 90s period. Jonah Hill also wrote the screenplay and gives every character the perfect backbone of story that we need to understand and have emotional attachment to them. Every character has their time to shine and every cast member especially the lead Sunny Suljic give fantastic performances.

Along with the wonderful performances, the score by Trent Reznor and Atticus Ross is no short of incredible. The soundtrack is perfect, featuring songs that perfectly capture the time period and how it was like to live during the 90s. The cinematography is also really well done.

In conclusion, Hill’s debut is wonderful and I can’t wait to see what else he does in his directing career. Mid90s will have moments that will make you laugh, cry, and most importantly, remind you of conversations you had with others when you were a kid and just overall nostalgia for when you were trying to fit in, and find your place in the world.

Below are the other films I have watched at TIFF:
Green Book Review
Widows Review
First Man Review
Climax Review
Hold the Dark Review
Wildlife Review
If Beale Street Could Talk Review

Check out me on the bird!

I live in Toronto and I review movies and stuff with very bad grammer and sentence structure…..